Every promoter and agency knows how to run a competition.  Knock out some copy, and stick on a box for entry.  Done.  Right?

Well, in many cases yes, and if the level of entrant engagement or barrier to entry sought is low, and the quality filter is wide, then yes, it’ll do.  But even just from an SEO point of view, time on page will be low, bounces will be high, and who is going to share, or talk about, or link to your competition beyond the incentive (your prize) immediately offered?

Entrants will land, see your question, and:

You can mitigate the effects of the above, and without having to build a complicated game or competition mechanic; maintaining the classic question and answer format.  Have the answer to your competition question contained in a video.

Video can be thought of as overly arduous and expensive if applied against the low standard of the “RT and follow” or “Like and share” promotion, but it needn’t be.  It also needn’t be a video provisioned explicitly for the competition itself.  It could be a fun/smart/provocative video that stands alone, but may happen to have the answer to your question, so make your video first, and your competition second – it can be a great way to virally “seed” your video.

The National Lottery used video as a competition reveal to in its #Letscelebrate campaign, celebrating the lottery’s 20th anniversary.  The mechanic used a daily ephemeral video, that, just like Snapchat, would expire after two hours.  At 6pm every day during the campaign, a short video would appear on the competition page, and in it would be a link directing users to a unique competition URL where they could enter.  It would expire at 8pm, and the hunt would reset again at 6pm the next day. 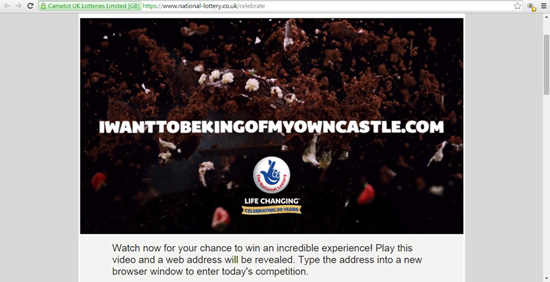 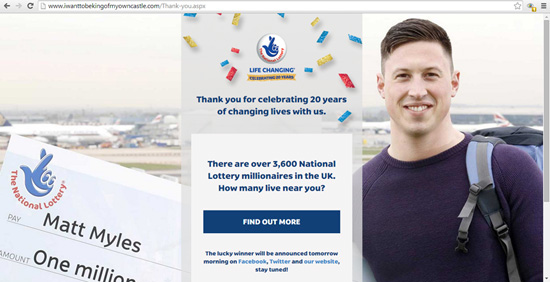 The campaign used video in much the same way as a treasure hunt clue, but was easily accessible enough not to bamboozle anyone.  After all, the entry mechanism at the unique URL destination was simply a multiple question and email entry.  But by implementing video they increased the fun factor, kept the good on page-metrics on the National Lottery central domain (national-lottery.co.uk/celebrate) and left the faster, more disposable entry on a wacky URL (e.g. iwanttobekingofmyowncastle).  The ephemeral, time-sensitive aspect adds some “miss-it miss-out” factor, but two hours is easily long enough to complete a 2 minute process, at peak consumer internet time.  And it recurred daily, so the realistic chances of missing out if you want to enter, are really nil.  In this case the National Lottery didn’t heighten its barrier to opt-in entry (its objective) by all that much – it just turned what can commonly be simply a lead generation mechanism into a fun mechanic that won shares, coverage and goodwill.